I help people work on stuff that matters, whether in a big organisation or on their own. I am interested in creating social impact and supporting creative entrepreneurs of all stripes.

I’m Head of Development Innovation at Nesta, director of The Kitschies, and a sometime writer.

(and I look awkward in photographs) 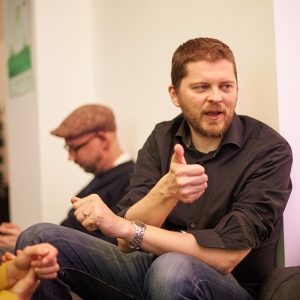 Glen is Head of Development Innovation at Nesta: he brings the deep expertise in innovation skills and methods to bear on the challenging problems of our times across the global south. He writes fiction and is the awards director for The Kitschies. He was founder at tech for good accelerator Bethnal Green Ventures and has designed and delivered innovation programmes in dozens of countries for a range of organisations including UNDP, UNDG, DfID, and the British Council. Glen spent a decade managing IT departments in Silicon Valley, working for organisations including SquareTrade and Burning Man. Before the Internet, Glen founded multidisciplinary arts collective The Space Between in New Orleans designing and creating performance works in alternative spaces. He serves on a range of boards, including as a school governor for St. John’s Angell Town primary school in Brixton (London), the advisory board for Konnektis and PlaqueChecker, and others. Glen holds a BA in English, Sociology and Design from the University of New Orleans and an MBA from Oxford University.

A little more information if you care (you clicked this)

Hi there. Thanks for stopping by.

You might have come because of my work on Innovation in Development, or because you’ve read a story or a book, or maybe you’re interested in who’s behind The Kitschies, or possibly you came to me for #techforgood.

I grew up in New Orleans, and, if you have to know, when to Ben Franklin and NOCCA (those from New Orleans will understand this answer). I spent a few years in university at UNO and started The Space Between, which worked on a range of theatre, film, and performance art works in site-specific locations. After university I went to the Dell’Arte International School of Physical Theatre, following which he spent 10 years in San Francisco managing IT departments for internet start-ups, working for a load of interesting companies like Burning Man, LookSmart, SquareTrade, Perlegen, and Exelixis, among others.

I left a couple of really interesting job offers to do an MBA focused on social innovation. The Great Recession of 2008 was taking hold just as I was graduating, so it was off to Uganda to work with Impact Carbon turning around Ugastove – and a couple of other companies whilst down there. Some late-night skype sessions had me on yet another plane to Zambia to work with Mike Quinn setting up a company that was intended to provide deal flow for social investors – but our first deal, Zoona, took on a life of its own and Mike stayed on as CEO while I came back to London and started working on Social Innovation Camp, which turned into Bethnal Green Ventures. During that time I helped about 100 #techforgood startups get going but we also piloted a number of initiatives including CultureShift, SICamp Asia, the UNDP Toolkit for Troublemakers, and range of SICamps around the world.

I can wire a plug and a lighting socket, diagram operational processes, maintain too many flavours of UNIX, plan cashflows, build things (from scratch or IKEA), use power tools, create operational metrics, tie his own bow tie, pack a truck like it’s a game of tetris, fix your computer (if you’re nice), mix drinks, tie five of the 85 knots in a necktie, cook, eat, clean a rifle, recover from jet-lag in less than a day, teach children, and write business plans.

I’m a school governor in Brixton, London and a current or past adviser for:

I also writes fiction which you can find out about here, and review books in 100 words here.