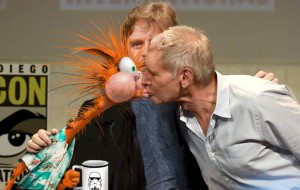 Bloom County is back, and that’s kind of amazing.

When I think on the wonderful things from my childhood I think of reading Bloom County in the Sunday papers, along with Calvin and Hobbes and comics from the X-men and Spider-man. There was something about the characters that drew me in, got me giggling, and got me thinking.

Bloom County, though, was astounding. It was surrealist-ridiculous without any kind of particular caveat – it was as clever as Doonesbury (which it prompted me to read, the text being so similar, though I often didn’t get the jokes) whilst being as human as the Peanuts. Its dark, twisted humour made light of so many things.

It was, for me, for then, what Jon Stewart is now. It got me thinking about the roles of politicians – what we wanted from them, and what they told us to want from them. It was irreverent, making fun of Trump, Caspar Weinberger, and others. It made me want to pay attention to politics and economics.

At the same time, it had a storyline about a little boy hacker and his artificially intelligent PCjr. The boy had few friends, but was frightfully clever and did all the things boys who liked computers wanted to do with their computers in 1983. The young kids were wise beyond their apparent years, and looked deep into the twisted, dark soul of humanity.

And then there was Bill the Cat. Some sort of love child of Borges, Irvine Welsh, and Dalí, he was the embodiment of a bit of Hunter S Thomson’s brain that had got away. He played in a metal band and ran for President, and it was insane and surreal and bonkers.

And gentle Opus, the butt of many jokes, with no butt.

Want to know how good it is? He published this joke, and then this is the spike in google traffic for “suds nuns”.

Bloom County is back, and that’s kind of amazing.