(Sorry for being not around—I’ve been very busy with several interesting—but unfortunately confidential—projects. I can say, though, that I’ve been investigating strategies for exploring new business opportunities in developing countries rather a lot)

Those of you who know me know me on my bike. I’ve had nice ones, crappy ones, and funky ones. It’s my default mode of transportation, particularly if you have nice employers who provide a shower and/or a locker for your suits (or who put up with you be hot & sweaty in the morning).

Sure, I get wet sometimes. I get sweaty. Sometimes I get shouted at, occasionally I have to cycle home after dark without lights (if I’ve forgotten mine) but overall it’s a pretty good way to get around, particularly if you live in London.

Some drivers who listen to too much Jeremy Clarkson can be rude, but overall London’s a pretty great place to cycle.

Then, occasionally, you get the nasty HGV drivers.

Now, I’m an assertive cyclist. I was hit by a car in about 1996, and am pretty careful these days.

I don’t pass on the inside coming up to lights. I (OK, generally) don’t jump lights (certainly never if there’s anything coming at all). I treat my bicycle as though it’s deadly to humans, and treat anything bigger than me as a big lump of stone.

I’ve occasionally shouted at drivers who have over taken too closely or nearly run me down, but at the end of the day, I figure it’s my job as a small, fragile thing to be visible.

So I do get very cross when a cement truck overtakes in a short narrow lane on a busy highway. But I’ve pretty much stopped shouting. I (hope) I can just get even. And maybe make a bit of difference.

The ubiquitous camera phone is the great equaliser here. I snapped the plate and the driver’s logo, 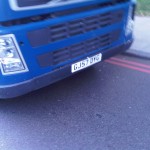 and then spent two minutes navigating the phone tree at hanson.biz to see if I couldn’t get in touch with a transportation supervisor. Voila! Not too difficult.

Let’s see if we can’t get Hanson.biz to sign up for Cycle Awareness Training or perhaps at least the No Lethal Lorries campaign.

Perhaps even a google-mappy-mashup a la Fix My Street is in order, where we route complaints and publish the results.

Jo from Hanson, I’m waiting for your response.