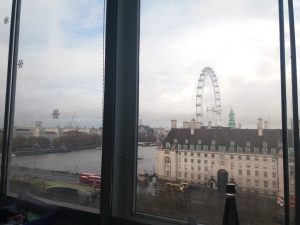 This is… not easy and really shit.

Some of you know I’ve been tired and out of sorts for a few months, and that I had to cut a work trip to Viet Nam short. I’m currently in hospital (St Thomas’ in London) getting another battery of tests done. I came back jaundiced and saw my GP who did some blood tests and tried to reassure me that it was most likely Hepatitis A. When Hep A is the good result, obviously, the range of options aren’t great. After dropping what feels like a litre of blood into various teensy vials, three trips to A&E, two ultrasounds, a CT scan, and a panel of experts looking at me I got admitted to hospital (yes I used an Oxford comma there I can’t be arsed to work out if it’s clearer without so I’m leaving it)

They’ve (very painfully) stuck a tube in my liver and are draining the bile externally and internally (sexy!). I also had a biopsy done.

Long story short (ish, I know I blew through 200 extraneous words my editor would trim up there), I’ve got cancer, specifically, metastatic leiomysarcoma. It’s coming from my duodenum and it’s gone into my liver. Which means it’s inoperable, but not untreatable.

HOWEVER I also have problems with my liver bile ducts aren’t draining properly, so I’m still jaundiced, and the cancer’s pressing on my duodenum (the first bit of the small bowel where food exits the stomach). I’m down about 13kg and if they tried to give me chemo at my bilirubin level I’d die.

The upside: Guy’s and St Thomas’ (GST) is absolutely THE place to go in the whole UK, if not all of Europe, for my gastrointestinal pre-cancer treatment. The NHS has just finished a 10 year overhaul of how it approaches cancer treatment and has improved on all indicators. There are loads of treatments that weren’t available 2 years ago and more coming online. And a friend who is a cancer researcher has looked at my team and said they are world class. Further, I’m being fastracked to the Royal Marsden which is the absolute top in Europe for sarcoma.

As an aside I would really love it if Parliament could get off its collective arse and stop this Brexit nonsense as it’s actually likely to be the biggest single policy danger to my life. Pick a mechanism, but the current malarchy mentions science cooperation only in passing.

It’s not just the clever consultants and senior doctors. Every member of NHS staff, from my GP to A&E team at AM2 in St. Thomas’ to the nurses on the wards to the assistants and cleaners work here because they care about people and it shows. I’m getting such attentive, solid, evidence based care that I have a wee breakdown most days. I would put them up for OBEs and above in a heartbeat. It’s also in stark contrast to the treatment I had at A&E(ER) in America in August. They did an ultrasound but, rather than using a trained radiologist they had the trainee doctor do it, so whilst they looked at my liver, pancreas, and gall bladder, they didn’t notice the unexplained mass between the three of them.

Identity and next steps

I’m not going to put together a facebook (or *shudder* linkedin group). I’ll probably work out some sort of email list or something but to be honest I haven’t got there yet. There are a lot of people from a lot of places.

Please from this point forward feel free to talk to people I might have missed out. Please ask them not to be offended, or don’t be offended if you didn’t get a call. I absolutely ran out of emotional steam and tears on those.

About my identity: for me, cancer is something I’m experiencing, not part of my identity. Please don’t be in touch using language like “warrior”, “survivor”, etc, especially not “cancer warrior”. It’s not for me. I’m ill, getting care, and going to (try) to get better. (Which is a remarkably subjective idea, as it turns out.)  This isn’t to disparage anyone else who that kind of language helps.

I would love to see you but I have to see how things go. I’ve phoned some people, emailed others, and some of you are going to find out by social media. I’ll keep updating through these channels. It’s going to be crap, but I’m finding surprisingly resilient – albeit with a renewed sense of gallows humour. Visitors welcomed, as are texts and whatnot, but please don’t be upset if I don’t reply. This is all very overwhelming.

Please, please, no-one set up a gofundme or anything. I’m getting excellent world-class care on the NHS, completely free, and it’s the best care I’ve ever received. I’m on the fast track due to my age and whatnot. Going private won’t change anything at all. If things get to that point I’ll pick a charity and let you know where to put your collective ironmans and marathons.

Big news. Thanks for reading all the way through.

11 Responses to “Exploding kittens in my liver, or, what’s been going on with me.”