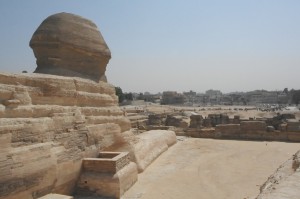 In my – and the British Council‘s – infinite wisdom, I went to Cairo last week. There’s been a revolution, there’s an election coming up, and the BC and my company thought that there might be some opportunities for the creative & cultural sector in Egypt to do something interesting.

Turns out, we were right.

Egypt’s tourist economy since the revolution has dropped by about 1/3. We did our bit – visiting the Pyramids, Old Cairo, and a big mosque in one day, as well as overpaying for a taxi. All in all, I think I got taken in for about £50 in scams. Not too bad, really, though I would rather have given that money to non-scammers. Such is life.

The Egyptians that welcomed us, however, including the TedxCairo folk, the Cairo Hackerspace crew, and all the Culture Shift winners were brilliant.

I took a couple of days out afterwards mostly to walk around, meet people, and see things. Cairo is:

All in all: brilliant. I’m looking forward to going back – with Clare next time – and to spending a bit more time (Hello, Alexandria!)